Since 2009 Workers Union Ensemble has commissioned more than twenty new works for their full line-up with support from PRS for Music Foundation, Sound and Music, and New Dots. The ensemble enjoys working closely with composers through workshopping, discussion, and sharing of ideas. They have formed particularly close relationships with their four composers in association, Matthew Kaner (2013), Ryan Latimer (2014), Seán Clancy (2015-16), and Helen Papaioannou (2017). 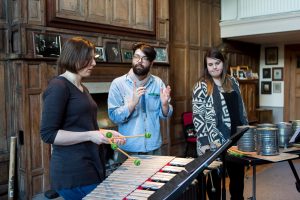 Composer Nicholas Morrish in conversation with percussionists Caz and Joley.

Listen by clicking on the links below or visiting our Soundcloud page.