Helen has recently completed her score Backscatter for the Workers Union Ensemble. We are really looking forward to rehearsing and performing the work in April at Playlist on Tuesday, 11 April, 2017 and Nonclassical on Wednesday, 12 April, 2017.

Ahead of these performances, we asked Helen to answer five quick-fire questions… 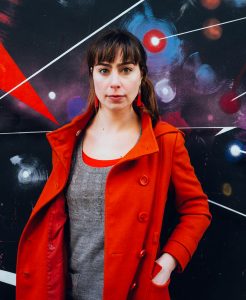 1- Tell us briefly what we can expect from your new piece for Workers Union Ensemble?

Backscatter is a sort of mottling of sounds and notes which are bounced, echoed or split between individual players or subgroups. This hangs around short lines and motifs that churn into mechanistic loops, exploring different colours and textures within the ensemble.

2- How does your new piece for Workers Union compare to your previous works?

As in many of my recent works, particularly Splinter (2016), the piece is built around hocketing. My fascination with hocketing lies partly in the interpersonal thrill & playfulness of coordinating patterns between two or more people. In recent pieces of mine this interleaves with an exploration of cueing and game strategies.

Backscatter retains this quality, but doesn’t use cueing systems. It’s a little less frenzied than my recent music (although it still has its moments!). My interest was drawn to weaving and hocketing motifs and lines through the group, particularly because of the wonderful colours and textures afforded by Workers Union Ensemble’s unusual instrumentation.

3- Is there anyone who you can single out as being the biggest influence on your music?

That’s a really difficult question, it’s hard to pick only one person. In this moment I’d say that as an all round influence, John Zorn is important both musically and in the way his approach continually evolves, with a curiosity spanning different styles & scenes. His game strategies have also influenced some of my ideas, and I’ve given this answer also because of the other musicians I’ve discovered on the Tzadik label.

But my response to this question will probably change depending on when you ask me!

4- What is on your current playlist?

5- Do you have any exciting projects coming up?

I’m also writing some music for and with HoKKeTT, a new trio with Tina Hitchens (flute) and Yvonna Magda (violin).

Next month we will perform at PLAYLIST (Southampton, 11 April) and Nonclassical (London, 12 April). We are super excited to be reunited and to be performing a new piece written for us by Helen Papaionnaou, which we commissioned through our recent Kickstarter campaign. We will also be (re)performing works by Laurence Crane, Seán Clancy, Jay Capperauld and Nick Morrish-Rarity.

In April we will be performing at PLAYLIST in Southampton. We will perform a new piece written for us by Helen Papaionnaou, which we commissioned through our recent Kickstarter campaign. We will also be (re)performing works by Laurence Crane and Seán Clancy.

We can’t quite believe over a month has past since our ‘ON & OFF TOUR 2015’. Thanks to everyone that came to hear us and to the fantastic composers we had the chance to work with on the project. Recordings and video are coming soon but we wanted to share just four of the many fantastic photos Markus Kinch took in the rehearsal for (and after) our gig at The Warehouse…

The fourth in our two question series is well, me…Ben Oliver, the conductor of the Workers Union Ensemble! Here goes…

Ben: In my piece, ZEROS AND ONES, I work with the idea of musical switches that either turn different musical materials ‘on and off’, or transform them in some way. So for example at the beginning of the piece the piano has a descending pattern that turns ‘on’ layers of material, and a high angry chord turns ‘off’ layers of material. As the piece develops switches also reverse, slow down and speed up the music.

Ben: I have a lecture I do about Ives most years at Southampton. I love his music and The Houstatonic at Stockbridge blows my mind every time I hear it!

I’m writing a piece for ensemble and poet and the moment and my favourite discovery in researching the piece has been a really tiny piece featuring Kenneth Patchen called Murder Of Two Men By A Young Kid Wearing Lemon Colored Gloves:

Murder Of Two Men By A Young Kid Wearing Lemon Colored Gloves from AdamPellinDeeve on Vimeo.

With only a few days to our rehearsals start here is the third of our super short interviews leading up to our ‘ON & OFF’ tour (18th-21st February), this time with composer and pianist Kate Whitley.

Kate: I love the little fragments of sounds in On  And Off And To And Fro, the delicate gestures and ideas that flit by. I tried to explore a similar idea in my piece, although on a totally different sound level! It is a fun piece to respond to because it’s so bold and disjointed.

I am learning some tiny Kurtag pieces at the moment, which has got me really into his music! As well as Jonathan Harvey whose Tombeau de Messaien I am playing in February.

The second in our series of quick composer questions is Scottish composer Mic Spencer. His new work for us is entitled CLSTRBMB.

Mic: OK – I’m going to be honest – I didn’t realise I was supposed to be responding to Simon’s piece haha…however – I’d say that the use of megaphones in my piece ties in to an extent with the Steen-Andersen, and I might well be able to think of other ways as I write the programme note tonight!

Mic: Wow! I’ve been revisiting Nono in the light of a friend’s sudden death (who happened to love Luigi’s music); which is off-set by recent purchases of Funkadelic and an album by John Parish and P J Harvey (I have their first collaboration ‘Dance Hall at Louse Point’, bits of which I used to teach in composition modules at the University of Leeds and only just discovered this 2nd collaborative venture over Christmas) – all stimulating stuff, if a tad eclectic!

Thanks Mic. Here is a clip of PJ Harvey and John Parish on the David Letterman Show:

Workers Union are delighted to announce that we have been selected for Sound and Music’s Composer-Curator Programme for 2014/2015, which is funded by the Paul Hamlyn Foundation.

The Workers Union Ensemble (WUE) present a programme of five new work developed in response to Simon Steen-Andersen’s On And Off And To And Fro (2008) for soprano saxophone, double bass, vibraphone and three players with megaphones. The new pieces might be a direct response to Steen-­Andersen’s piece or could be a more tangential reaction to the title and will be performed alongside On And Off And To And Fro in a mini-­tour of England. The composers featured will include three twentysomething emerging stars Ryan Latimer (WUE Composer ­In ­Association), Kate Whitley and Jay Capperauld (winner of the WUE Heidi Cupp Award 2013) as well as two slightly older heads Benjamin Oliver (conductor of the WUE) and Scottish composer Mic Spencer.

We are pleased to be able to share the videos from our gig at LSO St. Luke’s in November, which was in collaboration with LSO Soundhub.. Thanks to Ciaran Smith and and Chris Rogers for the videos!