We can’t quite believe over a month has past since our ‘ON & OFF TOUR 2015’. Thanks to everyone that came to hear us and to the fantastic composers we had the chance to work with on the project. Recordings and video are coming soon but we wanted to share just four of the many fantastic photos Markus Kinch took in the rehearsal for (and after) our gig at The Warehouse…

Better late than never (on the third day of our tour!) here is the fifth and final edition of our two question series. This time it is our Composer-in-association for 2015 Ryan Latimer. His work King is second work of Ryan’s that we have commissioned and performed.
Pick up your tickets now for our gig at the Warehouse tomorrow evening: https://www.eventbrite.co.uk/e/on-off-the-warehouse-tickets-15130043367

Ryan: The dialecticism suggested in Steen-Anderson’s title is also a common feature of my own work more generally, as it is for many others. I use the term ‘dialectic’ simply because the notions of ‘On And Off And To And Fro’ are not just contrasting ideas but are intrinsically related and relative to one another; they’re connected precisely because of their direct opposition. At the risk of becoming too technical, there are, in many types of music, examples of these binary relationships – tonic/dominant, major/minor, call/response, antecedent/consequence and so on. The majority of my piece playfully brings into contention these various devises and explores their functional (and dysfunctional) properties. However, this isn’t entirely what the piece is about and there’s a small twist in the tale towards the end, which extends this notion beyond the purely musical.

Ryan: A composer friend (I’m not sure how these differ from normal friends) recently recommended to me a book called ‘The Arab Avant-Garde: Music, Politics, Modernity’, which has unveiled to me a seriously exciting wealth of radical music making happening throughout the Middle East. Ranging from heavy metal, hip hop, musical theatre, sound installation, jazz and cross-discipline collaboration, all of this work engages profoundly with the socio-political realities of its home regions, in a way I feel much of western ‘art music’ does not. It’s been quite a liberating experience discovering this stuff; I’d recommend it.

Here is a retrospective exhibition of the work of Egyptian artist and musician Ahmed Basiony, who was killed during the 2011 political uprisings in Cairo:

The fourth in our two question series is well, me…Ben Oliver, the conductor of the Workers Union Ensemble! Here goes…

Ben: In my piece, ZEROS AND ONES, I work with the idea of musical switches that either turn different musical materials ‘on and off’, or transform them in some way. So for example at the beginning of the piece the piano has a descending pattern that turns ‘on’ layers of material, and a high angry chord turns ‘off’ layers of material. As the piece develops switches also reverse, slow down and speed up the music.

Ben: I have a lecture I do about Ives most years at Southampton. I love his music and The Houstatonic at Stockbridge blows my mind every time I hear it!

I’m writing a piece for ensemble and poet and the moment and my favourite discovery in researching the piece has been a really tiny piece featuring Kenneth Patchen called Murder Of Two Men By A Young Kid Wearing Lemon Colored Gloves:

Murder Of Two Men By A Young Kid Wearing Lemon Colored Gloves from AdamPellinDeeve on Vimeo.

With only a few days to our rehearsals start here is the third of our super short interviews leading up to our ‘ON & OFF’ tour (18th-21st February), this time with composer and pianist Kate Whitley.

Kate: I love the little fragments of sounds in On  And Off And To And Fro, the delicate gestures and ideas that flit by. I tried to explore a similar idea in my piece, although on a totally different sound level! It is a fun piece to respond to because it’s so bold and disjointed.

I am learning some tiny Kurtag pieces at the moment, which has got me really into his music! As well as Jonathan Harvey whose Tombeau de Messaien I am playing in February.

The second in our series of quick composer questions is Scottish composer Mic Spencer. His new work for us is entitled CLSTRBMB.

Mic: OK – I’m going to be honest – I didn’t realise I was supposed to be responding to Simon’s piece haha…however – I’d say that the use of megaphones in my piece ties in to an extent with the Steen-Andersen, and I might well be able to think of other ways as I write the programme note tonight!

Mic: Wow! I’ve been revisiting Nono in the light of a friend’s sudden death (who happened to love Luigi’s music); which is off-set by recent purchases of Funkadelic and an album by John Parish and P J Harvey (I have their first collaboration ‘Dance Hall at Louse Point’, bits of which I used to teach in composition modules at the University of Leeds and only just discovered this 2nd collaborative venture over Christmas) – all stimulating stuff, if a tad eclectic!

Thanks Mic. Here is a clip of PJ Harvey and John Parish on the David Letterman Show: 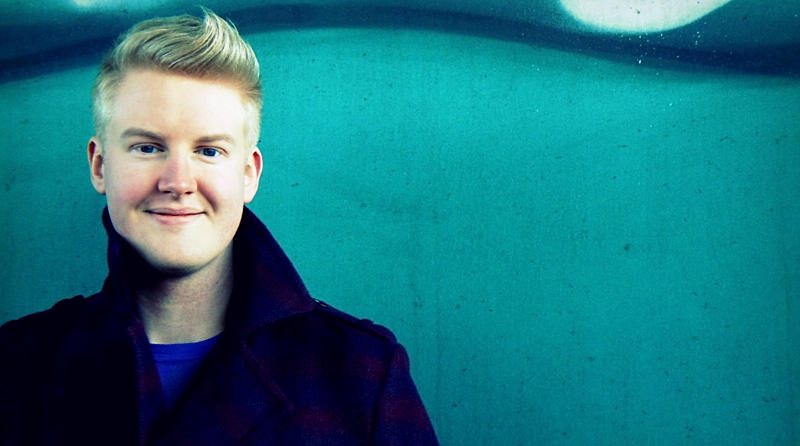 In preparation for our upcoming ‘ON & OFF 2015’ tour we’ve asked the five composers who have written new works to answer two quick questions. We’ll be posting their answers in the coming weeks in the build up to the tour (18th-21st February).
First up is Jay Capperauld who we commissioned to write a new piece for us after he won the Heidi Cupp Award in our inaugural call for works in 2013:

WUE: In what way does your piece, Circumstantial Awareness at Zero-Depth Entry, respond to the ‘On & Off’ theme?

Jay: “On & Off” inspired me to explore the idea of coexisting opposites within one cohesive expression.  In this case, I am attempting to find a level playing field between logic and non-logic – both in a musical and psychological sense – with the intention of allowing each an equal precedence to influence and govern the compositional decisions made in the work.

Jay: At the moment I’m listening to a lot of Birtwistle, Romitelli and Feldman. But I’m probably always subconsciously listening to Ivor Cutler.

Thanks Jay. Here is our favourite Ivor Cutler tune:

We are pleased to be able to share the videos from our gig at LSO St. Luke’s in November, which was in collaboration with LSO Soundhub.. Thanks to Ciaran Smith and and Chris Rogers for the videos!

Hello!
We are currently recuperating and planning our 2014 adventures after our fantastic October and November mini-tour! Thanks to everyone that supported our gigs in Southampton, Birmingham and at LSO St. Luke’s and to all the composers that wrote us pieces. Recordings etc are just starting to come in. The following Soundcloud playlist is from our gig at the Birmingham Conservatoire on 29th October 2013. All photos are by Markus Kinch of Film41 from rehearsals at our LSO gig. More to come…!
WUE

We are delighted to announce the four shortlisted composers from our Call for Works 2013 are Jay Capperauld, George Christofi, David Kirkland Garner and Amber Priestley. We will perform their new works at our LSO St Luke’s Concert on 9th November where the audience will decide who wins the Heidi Cupp Award. Well done to the four composers and many thanks to all of the 85 composers from around the world who submitted pieces.